Indole or not indole? 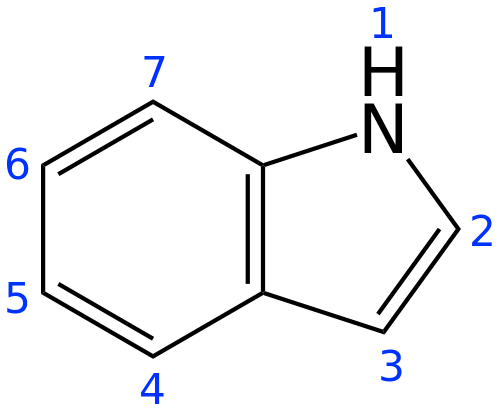 I have perhaps a dozen full bottles of fragrance. Samples? I have no idea. Over a hundred. Over two hundred? I don't know. I fear the entire collection looks like something happened to it. It has been moved too many times. Something spilled, perhaps. I have one large box of samples and a few small ones, and they all have a smell that makes me recoil. It is not inspiring to look upon these "collections." They look worn and unloved and I certainly do not love them. Now I think I know why that is true. Indole.

I bought a bottle of Tom Ford Black Orchid Voile de Fleur (a flanker to Black Orchid, now discontinued) for ten or fifteen dollars some years back. Y'know, the price of an expensive sample - what's to lose? I do not like white florals and hoped this was some sort of dark impression of flowers (if that makes any sense).

This is one of those times I wish I'd work at developing my vocabulary for scent, but alas, I digress. . .

When I'm trying a perfume in a spray bottle, I put the nozzle right up against my wrist and press it ever so gently. I know I don't like being fully sprayed with anything, even if it's my favorite scent. If there's a hint of florals within, I am as cautious as can be. Big heady white florals have varying amounts of indole, which many folks find unpleasant in varying degrees, from a bit much for one's taste to revolting, cloying, sickening, suffocating, and even literally headache inducing. 1980's scents to me were mostly all of these things. I didn't know about indole (silly me) until I read this very interesting (and bad) review of Voile de Fleurs at Kafaesque. For more, Perfume Shrine has this excellent article about indole.

Indole indeed. I put a dab of Voile de Fleurs on sometime this morning, as I am all of the following: In a unsettled mood, want to smell something new, want to be intoxicated by scent, and am, obviously, some sort of masochist. No, really, I don't know why I did it. Truth is, there's something in this mess of a smell that I like, but I think anything more than a few molecules will suffocate me. It reminds me of White Shoulders (from memory) times a million. I used to wear White Shoulders when I was in my mid-twenties and making an attempt to be feminine. I should go to a drugstore and buy a little bottle just to see what it's like.

Anyway, twenty minutes after putting this oh so small amount of horrible juice on my wrist, I was scrubbing with everything I had, and thought I'd removed the offending odor. Then I put on one of my favorite scents. I'm still feeling as if I'm choking. Oh, indole! I seriously hate you, and now I know I'm not alone.

Then again, it could just simply be bad perfume. Nothing more and nothing less.

Many hours later, I am moving into the disgust phase. I imagine the indole molecules combined with the perfume I am wearing to produce this fetid smell that I am horrified by, and dearly hoping that nobody but me can detect. My cat is kneading me wildly, purring with abandon. She clearly is not perturbed.

I have a very similar kind of blog, except I'm lazier than you... I only post when I feel I have something to say (guess I'm kinda vain as well as lazy) which means once a month, maybe.
Anyway, it's been great to read it. Well, a lot of it, anyway.

Why have the posts stopped, though? Us rambly-headed people need content, man!

Regardless, thanks for what there is. It's a good place to spend an odd few minutes here and there.

Thanks, Nina. Why have the posts stopped? Life intervenes. .

What you're reading this week

Unless it's about mechanics, you just might find what you're looking for